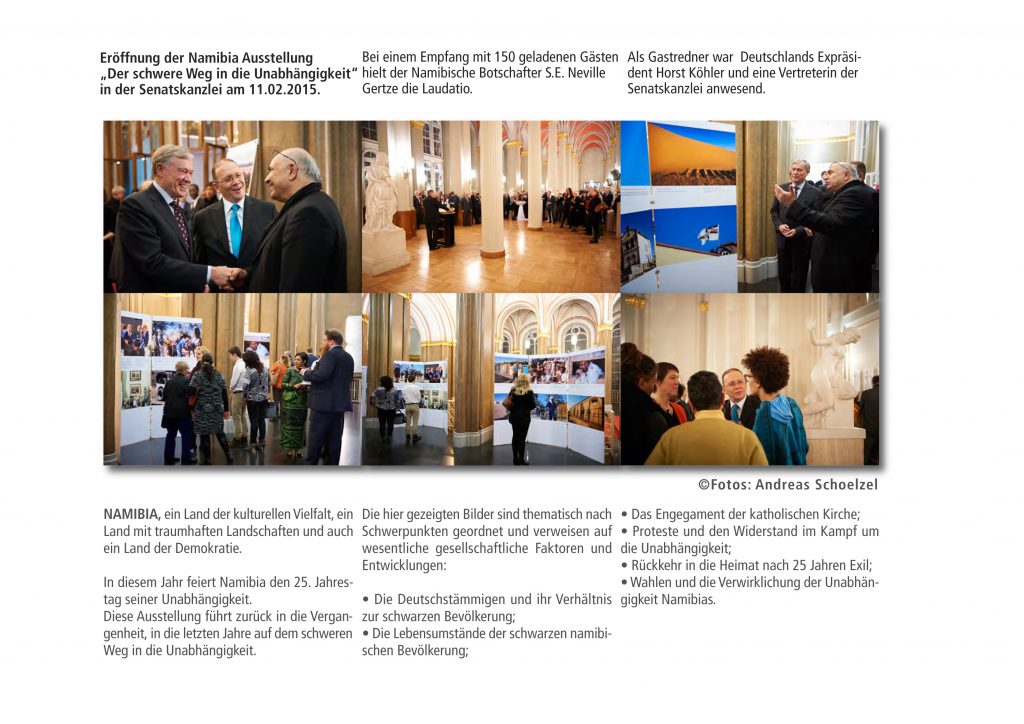 Farewell Speech on the occasion of the opening of the exhibition

Namibia – The Hard Walk to Independence

Unfortunately and much to my regret, I was not familiar until last year with the work of the award-winning Cologne-based photo journalist Guenay Ulutunçok. I never knew he had spent the transition years from 1988 to 1989 in Namibia, and again from 1990 until 1991 had travelled throughout Namibia, South Africa, Mozambique and Angola with his camera. Only recently did I learn of his treasure of a private Africa archive of 50.000 photos of which about 9000 were taken in Namibia. A fair share of these relate to the final years of our

struggle for national independence. Today we see only a small but nevertheless very

powerful fraction of these reminders of a period in our most recent history.

Most of you are aware that on 21 March 2015, Namibia will celebrate 25 Years of Independence. The new government, which was elected on 28 November 2014, will be sworn in, and President-elect, HE Dr. Hage Geingob, will succeed the current President, HE Hifikepunye Pohamba, after 10 years in office.

A Jubilee Year is the perfect moment to critically assess where we as government were successful, what we could have done better, and where the focus of government policy should lie in the future.

We can proudly state that Namibia has enjoyed 25 years of peace, stability, and democracy. As the President-elect reminded us in his first public announcement on 02 February 2015, after winning the Presidential elections with a resounding mandate of 87{de34ad0e10d2f17db64c22136fb03aa46d63763ee374b4267a7d64b43e087e85} of the vote: (and I quote) “Namibia is a ‘Child of International Solidarity’, friend to all, enemy to none” (end of quote) – I dare say that this is not a small thing in a world where tension, conflicts, terror, racism and tribalism, ’hot’ and ‘cold’ wars are on the increase.

Bear with me that at this point in time, I do not wish to anticipate what our new and able leadership will say and do, once it assumes office in March. However, what I can reveal is that there is a lot of busy planning going on. HE Dr. Hage Geingob is a firm believer in good and timely planning. In his address he said (and I quote): “We are bringing the future into the present so that we are ready to face the challenges and expectations that await us” (end of quote).

However, while looking ahead, the President-elect also attaches much importance to greater historic contexts – after all, history is never just another closed chapter, or as William Faulkner once said: “The past is never dead. It is not even past”; and one of your great novelists – die Berlinerin Christa Wolf – fügte hinzu: “Wir trennen uns ab und stellen uns fremd.” (“We cut ourselves off from the past; we pretend to be strangers.”)

Even though we sometimes yearn for that cut and prefer to look ahead, history has taught us that there is no clean break – there is no fresh start – das es sie nicht gibt und niemals geben wird – diese “Stunde Null”. (That a “zero hour” does not exist and will never exist).

Your late President von Weizsäcker, in his 08th of May speech in the Bundestag during the 1985 Ceremony Commemorating the 40th Anniversary of the End of War in Europe and of National-Socialist Tyranny, shared this wisdom when he admonished his people not to see the end of the war (and I quote) “as the cause of flight, expulsion and deprivation of freedom. The cause goes back to the start of the tyranny that brought about war. We must

not separate 8 May 1945 from 30 January 1933.” (end of quote) In this context, he regarded the 8th of May as a day of liberation, and he said (I quote) “It liberated all of us from the inhumanity and tyranny of the National-Socialist regime.” (end of quote)

The exhibition begins with the photo of the classic example of German colonial subjugation, the infamous Horse Rider, and at a later stage shows in an impressive way the taking over of this symbol of conquest by the black majority that was oppressed and tyrannised first under German colonial rule, and then disenfranchised, abused and suppressed by Apartheid South Africa. It also shows people determined to reclaim their history in an act of defiance and resistance.

The exhibition brings back a lot of memories:

When I look at some of the photos and read the captions, I wonder what the white elite thought of “us” black people, still shortly before we gained independence, and I ask myself whether they were afraid of “us”– their alleged enemies – taking revenge for all the atrocities that were committed in the name of “separate development” – this euphemism for what the United Nations called a “crime against humanity”?

I wonder, have they realized their wrongs and do they regret them? Or is their past something they rather not be reminded of?

Do they engage in society while reaping the fruits of democracy, peace, and stability that the Namibian government with the help of the international community brought to them?

Did they consider the 21st of March 1990 as a day of defeat, or rather as the end of an aberration in Namibian history, “an end bearing seeds of hope” – to again quote your late President von Weizsäcker.

And I wonder, have we lived up to our responsibility as democrats in a democratic society to show them that the 21st of March 1990 also liberated them from inhumanity and tyranny?

While I fail to answer these questions, I believe that we as government planted the seeds of hope when our Founding Father, HE Dr Sam Nujoma, introduced the policy of reconciliation. As uncompleted as the process still is, it opened the doors for all of us to become part of a community of people living together under the rule of law, which honours human dignity, equality and freedom from discrimination, prohibits slavery and forced labour and guarantees basic freedoms.

“Namibia is still a country divided along tribal lines. No one can deny that”, said the President-elect in July 2014. For clarifications sake, I wish to stress that in Namibia the term “tribe” does not only apply to African ethnic groups as it does in Europe; in Namibia, when we make use of the term, it also includes our German and Afrikaans speaking tribes.

In that very same speech, my President-elect, HE Dr. Geingob, then continued to quote the editor-in-chief of the South-Sudan News Agency, Duop Chak Wuol, who shared a universal truth with us, and I wholeheartedly agree: “Tribalism is a mental prison…and pride of identity coupled with arrogance is one of the leading factors that limit one’s ability to abandon it.”

We must all remember that the extended hand of reconciliation, just like democracy, must never be taken for granted. We all have to actively take part in shaping our future as responsible human beings, and understand that

“We are all one by creation, bound together as limbs in a body, if one part aches, the rest will suffer as well.”

I wholeheartedly thank my team at the Embassy for six years of capable support, and above all, I thank my wife Amy, without whom I would not have been able to enjoy and master the challenges that came with being the Namibian Ambassador to the Federal Republic of Germany.

We use cookies on our website to give you the most relevant experience by remembering your preferences and repeat visits. By clicking “Accept All”, you consent to the use of ALL the cookies. However, you may visit "Cookie Settings" to provide a controlled consent.
Cookie SettingsAccept All
Manage consent

This website uses cookies to improve your experience while you navigate through the website. Out of these, the cookies that are categorized as necessary are stored on your browser as they are essential for the working of basic functionalities of the website. We also use third-party cookies that help us analyze and understand how you use this website. These cookies will be stored in your browser only with your consent. You also have the option to opt-out of these cookies. But opting out of some of these cookies may affect your browsing experience.
Necessary immer aktiv
Necessary cookies are absolutely essential for the website to function properly. These cookies ensure basic functionalities and security features of the website, anonymously.
Functional
Functional cookies help to perform certain functionalities like sharing the content of the website on social media platforms, collect feedbacks, and other third-party features.
Performance
Performance cookies are used to understand and analyze the key performance indexes of the website which helps in delivering a better user experience for the visitors.
Analytics
Analytical cookies are used to understand how visitors interact with the website. These cookies help provide information on metrics the number of visitors, bounce rate, traffic source, etc.
Advertisement
Advertisement cookies are used to provide visitors with relevant ads and marketing campaigns. These cookies track visitors across websites and collect information to provide customized ads.
Others
Other uncategorized cookies are those that are being analyzed and have not been classified into a category as yet.
SPEICHERN & AKZEPTIEREN